How would you invest $10k in the stock market?

Just something I've been thinking about for a while. If I had $10,000 right now, how would I invest it?

Looking at the stocks I had on my wishlist (pre-covid), most are no longer attractive buys due to the current and future implications of covid-19 on the hospitality, retail and banking industries. Some of the more stable and unaffected businesses are still expensive (NetLink, that's you!) while a small number (mainly overseas tech stocks) have rallied due to an unexpected upside of humans having to adapt their lives to work, live and play from home.

This is by no means a comprehensive review, just sharing my thoughts on some of the stocks I've looked into.

I did not give this merger much attention back in January because I was (and still am) bearish on the long-term potential of physical retail in Singapore. I am already exposed to offices through Mapletree Commercial Trust and Mapletree North Asia Commercial Trust so I did not see the need to add either of these 2 REITs to my portfolio. Both CMT (C38U.SI) and CCT (C61U.SI) were pretty expensive before the market crash anyway.

Despite my long-term bearish outlook on retail in Singapore, I do think that there is a potential for short-term upside when circuit breaker measures ease off. Especially if border restrictions remain and Singaporeans have to contend with local spending. We see this happening in China right now, but I'm not confident it will magically bring retail REITs back to pre-covid revenue and profit levels. So I'll pass on CMT.

CCT though, is an interesting one as their Q1 financial results looked pretty stable. Office rents are expected to be more resilient than retail rents even though unemployment is on the rise. A company can retrench 100 of its employees but it's not so easy to reduce their rented space by 100 seats unless their lease is expiring. We may see falling demand for office space in the future as companies embracing more flexibility in working arrangements, I see this as a gradual change over time. I also wonder how well this will take root in Singapore, when bosses associate physical presence in office as directly correlated to the amount of work done 🙄

There are 2 main things that I would keep an eye out for CCT.

I will hold off on investing into CCT until there is more news on their deal with WeWork. The scheduled EGM to vote on the merger of CMT and CCT has also been delayed till further notice. This isn't surprising since the share prices have dropped significantly since the initial merger conditions were published.

Lendlease is probably the only commercial REIT that has released positive financial results for Q1 2020. Sky Italia's rental payments not being affected (thus far) by the covid-19 situation definitely helped prevent its revenue from dipping into the red.

I like Lendlease for its long WALE of 9.9 years, high occupancy rate and high interest coverage ratio of 11.2. Although the REIT only has 2 properties under its management, this has turned out to be a blessing since losses from 313 Somerset can be partially offset by the stability provided by Sky Italia.

There will be tougher times ahead in the next few quarters, if the 29% drop in visitation to 313 Somerset (comparing Oct - Dec 2019 and Jan - Mar 2020) is any indication. Despite the looming headwinds affecting retail in Singapore, the majority of 313 Somerset's leases have been renewed for FY2020 and only about 5% by Nett Lettable Area (NLA) is due for renewal in FY2021. If we assume zero revenue and income from operating activities for the next quarter, they have enough free cash to cover both property operating expenses and current liabilities comfortably.

The share price has come down 40% from its 52 week highs. This will be my first pick if I'm going to increase exposure to retail in Singapore. The only two clouds on the horizon are

A positive sign would be if the Sponsor transfers any of its properties under the REIT's management to reduce the reliance on 313 Somerset. JEM, Parkway Parade and Paya Lebar Quarter are the 3 retail/commercial properties the Sponsor owns locally.

I was pretty much set on averaging down for OCBC until I read their latest financial results. The drop in profit was unexpected to me as I had forgotten to take into account how Great Eastern would be impacted by covid-19, and the knock-on effects on OCBC as the parent company. And they were doing so well in Q4 last year! 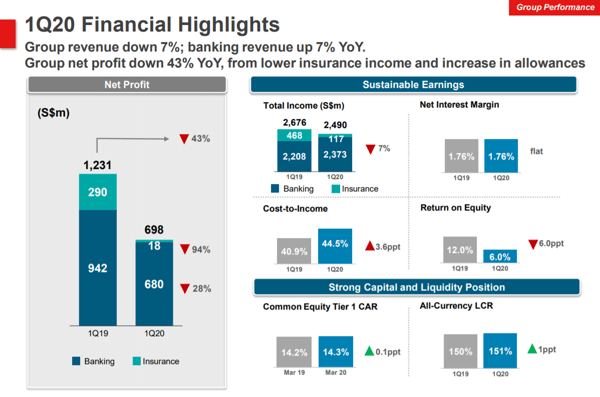 GE's non-operating losses tripled YoY ($222.8 million from $75.9 million in Q1 last year), while operating profit doubled to $298.6 million from $148.7 million from the same quarter last year. GE contributed to 23% of OCBC's net profit in Q1 2019. I am expecting the share price of all banks to be volatile in the short term so I'll tread carefully here and consider averaging down if prices drop below $8.50.

If you have not read through one of their earnings release, you really should. Alibaba is growing rapidly while staying profitable (unlike many US tech stocks). The group's Core Commerce segment is carrying the team at 88% of revenue while they work on improving profit/loss margins in their smaller business segments:

Alibaba is cash rich (FCF ~190 million RMB) and their interest coverage ratio is 37%. A large percentage of their revenue comes from what they call "China commerce retail". This segment includes e-commerce platforms Taobao and T-Mall, which are expected to do well in the current climate of lockdowns and movement restrictions, and a supermarket chain called Freshippo/Hema (河马) which has 135 physical stores (as of Mar 2019) and also does online delivery. Considering how well grocery stores in Singapore are doing, I imagine the same effect happening in Chinese cities too.

By the way, RedMart is under Lazada and Alibaba has a controlling stake in Lazada - valued at 83% of the company in 2017. Alibaba recently acquired a 50% stake in AXA Tower which houses Lazada as an anchor tenant. These are signs of confidence in their local and international business segments. I am bullish on Alibaba even if there is near-term weakness due to covid-19 and I plan to continue averaging in at every dip I can catch. Alibaba is expected to report their Q1 2020 earnings on 22 May 2020 at 7.30pm (UTC +8).

How To Start Investing Today With Index Funds

A quick look at Shareable Asset