How have the new rules on CPF usage affected old HDB resale prices?

This is a guest post by Data Science Investor. He specialises in the use of data science tools to analyse properties and stocks. Yes, he's a geek.

On 10 May 2019, new rules on CPF usage starts to kick in. In this new rule, it's necessary that purchased resale property need to cover the youngest buyer till the age of 95 before the buyer is entitled to have the maximum HDB loan of 90% of property price or valuation.

In the past, you faced restrictions in buying a resale property with a remaining lease between 30 and 60 years. If the remaining lease covers the youngest buyer till age of 80,  you could use your CPF but the total amount of fund which could be used will be pro-rated accordingly.

Unlike the old rule which focus on the remaining lease of the property, the new rule aims to put more focus on whether the property could cover the home owner for life.

Half a year has passed since the new rules kick into effect.

When I was having a conversation with Joce the other day, she was having this question in mind. How have the new rules on CPF usage affect old HDB resale prices?

Being the Data Science Investor I am, I immediately got interested in this question and was interested to investigate a bit deeper into this topic to try to answer this question. In fact, I'm also deeply curious to understand what kind of effects does the new rule has on the resale HDB market now.

So I begin the quest to dig a bit deeper.

Here is a screenshot of how the data is presented when you download them from www.data.gov.sg

From this data, I decided to group the transactions according to 5 year periods based on the remaining lease of the HDB resale property when the transaction happened.

Here is a quick overview of the number of transactions according to the different 5-year periods of the remaining lease. 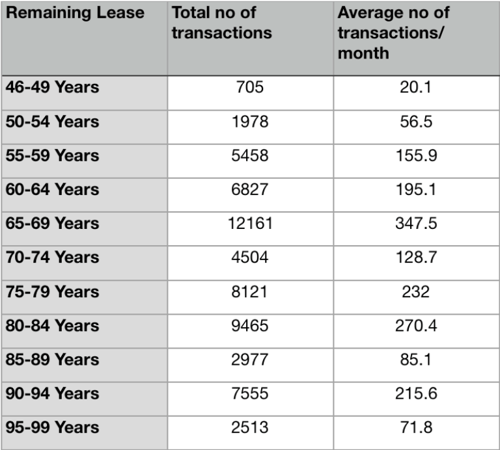 Properties with 65 to 69 years lease remaining have the highest amount of transactions. Interesting.

Now, let's include another set of data which focus on the number of transactions which happened from May 19 (when the new rule kicks in) to Nov 19.

This is particularly interesting. One possible explanation for this phenomenon could be that the new CPF rules lure the older buyers to purchase the older flats, hence driving up the demand and resulted in more transactions for the older HDB resale flats. At the same time, this also drives away demand for the newer HDB resale flats, hence those flats with remaining lease between 65 to 89 years tend to have less demand and this resulted in less transactions.

The reason for the increase in transactions for HDB resale flats with remaining lease of more than 90 years though could be that there are generally more BTO flats built in recent years and there are usually more transactions when the BTO reached its MOP as people tend to sell/upgrade their properties. Hence, these newer flats (with remaining lease of more than 90 years) have an increase in transactions in the recent years primarily due to this and not so much due to the new CPF rules.

Now, how about the prices? Have the older HDB resale flats see an increase in resale prices due to the new CPF rules? 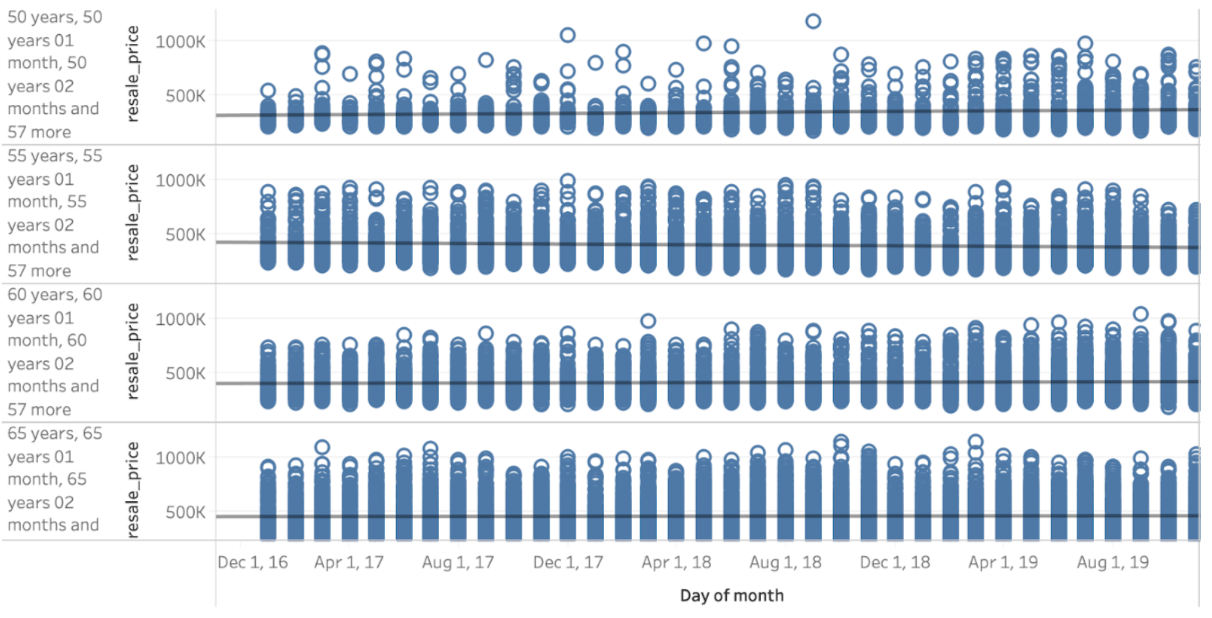 To answer that, I start to plot the trend lines for these various groups of remaining lease as shown below and obtain the r coefficients. r coefficient is usually used to explain the strength of the linear relationship between 2 variables (in this case, price against time). The more positive the r coefficient is, the better is the price performance over time in this case.

Here are the r coefficients for the respective trend lines of various groups of remaining leases. 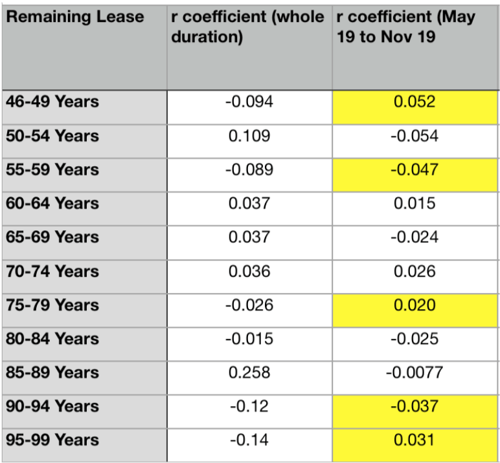 Generally, there isn't enough evidence to show that the new CPF rules have a positive/negative effect on the old HDB resale flat as there isn't a general trend which we can see here. Also, a key thing to note here is that we only have around 6 months of data from May 19 to Nov 19 since the new CPF rules kick in. There might not be enough data to make any meaningful conclusions out of the trend lines at this point of time. This will however be overcome when we have a few more months or years of data.

In conclusion, the new CPF rules do seem to help to move the older HDB resale flats a bit more, resulting in more transactions in the recent months. However, we could still not conclude if the new rules has any effect on the old HDB resale prices. At this point of time, we will say that the new rules has negligible effect but that might change in the future when we have more data.

Want to know more about property or stocks from a data science point of view? Subscribe to www.datascienceinvestor.com here!